“This Is My Story”- Barthle Brothers Ranch 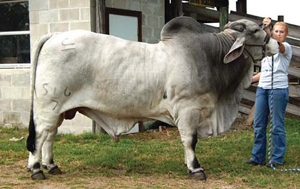 The Barthle family name also began appearing in Florida’s cattle records in the 1930s and 1940s. “At that time our Brahman cattle, like most, were open-ranged in the eastern part of our county. Cattle intermingled with neighbors,” said Larry Barthle, a member of the third generation of the ranch. Though this may have fostered a lack of incentive to breed up to improve Brahman genetics, it did run straight into a barbed-wire fence and the importance of the Barthle family’s need for the Brahman breed. “Once the fence laws came into effect, upgrading started, and the first breed we used on the Florida scrub cattle were Brahmans.” At this point, Barthle needed to improve his Brahman genetic base and did so by implementing Brahman bulls bought from — you guessed it — Henry O. Partin. Barthle’s originally operated under the name of J.A. (Joseph Albert) Barthle & Sons. In later years it would shorten to Barthle Brothers Ranch, which is the name the operation still carries today. The ranch was divided in the 1970’s between J.A.’s two sons families: Albert (Al-Bar Ranch) and Joe (Barthle Bros). Joe’s son, Larry Barthle, is one of several family members involved in the operation. “Our families original ranch is in one tract and all intact,” Larry proudly states. “Though the ranch may be split between brothers and uncles and other family members, it is still one unit with all the property connected.” The Barthle family began showing their Brahman cattle in the 1960s, but later took some time away from the ring to dedicate to the Brahman herd itself. In 1989, the junior show circuit attracted the Barthle and Dillard children, and thus the family began competing once again.

To read the full article as featured in The Brahman Review, please click here.