The History of Barthle Brothers Ranch 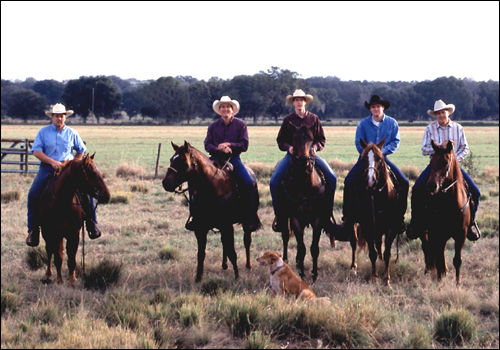 When Ponce de Leon discovered Florida in 1513 it was mostly wide green spaces. When he returned in 1521 he brought cattle and horses making Florida the oldest cattle producing state in the nation. By 1880, about the time J.A. Barthle moved to San Antonio as a child, Pasco County was home to an estimated 25,000 head of cattle.

Joseph A. Barthle’s father, Charles, was an early settler of San Antonio. This colony was established in the 1880’s. Joseph A. grew up to be a businessman whose ventures included a sawmill, grocery store, road construction co., citrus, and a cattle herd grazing on Florida open range. In the 1930’s, sensing the end of open grazing with coming passage of fence laws, J. A. Barthle began purchasing land. This was mostly native pasture, cypress stands, oak scrubs, pines and palmettos with lots of ponds and lakes. By then Joseph W. and Albert A. were coming home from the services and JA Barthle and Sons was in the ranching business. Originally about 20,000 acres was purchased and some sold soon to finance barns and a bulldozer for clearing land. From the beginning much of the land was left natural with improved pasture scattered around the property for more intensive grazing. In 1970 and 71 JA and Albert passed away and property had to be sold to pay inheritance taxes. The remaining 16,000 was split between Joseph W. and Albert’s families. The 28 members (children, spouses, and grandchildren of Joseph W.) own and operate Barthle Brothers Ranch today.

The operation has developed over the years from running native cracker cattle to introducing Registered Brahman bulls in 1942. A registered Gray Brahman herd was added later to raise bulls to use in the commercial operation. Extra bulls and heifers were also sold to other breeders. A 3 breed herd rotational breeding system was established in the 1980’s using Brahman, Angus and Hereford bulls. Every third generation Brahman genetics are reintroduced to the system. This enables the cattle to thrive in Florida’s subtropical climate. Charolais bulls have been added as a terminal sire only in 2 of the 3 herds. The registered Brahman herd has continued to develop and has been supplying other cattlemen in Florida, the Southeast and other countries with its genetics. Birth and weaning weights have been collected since the 1980’s on all registered calves. Carcass information is now included in the data being collected on all bull calves.

Joseph also had an eye for and love of horses. He developed his skill as a horseman riding open range and riding day after day doctoring for screw worms. Cattle are still worked on horseback today. Ranch horses have been marketed locally and internationally as work horses, all rodeo timed events as well as many other disciplines.

Wildlife management has always been a priority on the ranch. Florida Game and Fish conducts population surveys to determine numbers and recommend management practices including numbers to be harvested, types of food plots, and practices to encourage thriving future numbers. Despite the fact that some of the species have been affected by the lack of surface water on the ranch after drawdown by local urban well fields. The ranch has always protected its vast array of species living on the ranch. Endangered, protected or not. Species include white tail deer, Osceola Turkey, Bobwhite Quail, Dove, Scrub Jays, Bald Eagles, Red Cockaded Wood Peckers, various Ducks, Wood Storks, Pond Birds, Song Birds, Wild Hogs, Bobcats, Grey and Fox squirrels, plus more coyotes than you could want.

The family is active in many facets of the community. They are involved locally in church, school and agriculture organizations. Many family members have and continue to hold leadership positions in the Florida Cattlemen and CattleWomen’s Associations, National Cattlemen’s Beef Association, National CattleWomen’s Association, Florida Beef Council, Florida Farm Bureau, Florida and American Brahman Breeders Associations, American Quarter Horse Association, Future Farmers of America, Professional Rodeo Cowboys Association and many local interest groups. The accomplishments of the family have been recognized by many local, state, national, and international organizations.

Please visit the rest of the website for more information on the different facets of the ranch. Contact information is listed in each area as well. Go to the Three Pines Preserve page for all information including pricing for guided Quail and Turkey Hunts.

Check back from time to time for updates and current pictures on available cattle and horses for sale.