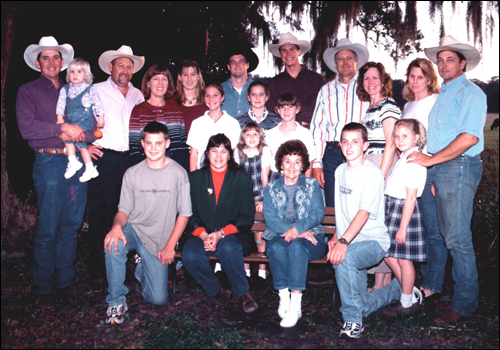 The family-owned and operated Barthle Brothers Ranch of San Antonio, Florida, was formed in the 1930s by businessman J.A. Barthle. His sons, Joseph and Albert, from whom the ranch takes its name, carried on their father’s work. Today, J.A. Barthle’s grandsons and daughters carry on the family tradition with the help of their children.

The 8,000-acre ranch operates in the face of encroaching urban development that has had a major impact on their land. Despite this, the Barthle Brothers Ranch remains a model of agricultural diversity with each family member contributing his or her unique strengths. 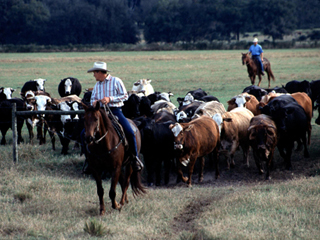 At the center of the family is their mother, Jeanette Barthle Sutton, author and past president of the National Cattlewomen’s Association.

“It’s been great to have them close by and to be able to see them and the grandchildren regularly,” she said. “We’re a very close-knit family.”

The Barthle Brothers Ranch is a multifaceted agricultural enterprise located in Pasco County. The spread is home to a 1,000-head commercial cow/calf operation, utilizing a three-breed rotational system of Angus, Hereford and Brahman. Currently the ranch has 75 head of Brahma brood cows from a herd that began in the 1940s.

While cattle is its primary agricultural venture, Barthle Brothers puts great pride in its quarter horse herd. The cattle have always been worked from horseback, and, since 1946, this herd has been the source of working horses as well as additional income for the ranch.

Rotational grazing of the cattle allows another agricultural enterprise for the ranch: Bahia sod and grass seed. The operations, which includes harvesting both Pensacola and Argentine Bahia, allow the ranch to recoup fertilizer costs on pastures while increasing grass production for the cattle.

Barthle Brothers returned to one of its original crops — pine trees — as an additional source of income that would enhance the beauty of ranch and increase the amount of wildlife. Like many Florida ranches, Barthle Brothers harvested the timber on its property in the 1940s to pay for the ranch’s land. In the 1980s, hoping to generate future revenue from rough, unimproved pastures, the Barthles joined the Forest Incentive Program. Working with the Forestry Service, they successfully established long leaf pines which have the added benefit of opening up more area for wildlife and cattle.

Unfortunately, the cypress trees on the ranch haven’t fared as well. Well fields drilled by Pinellas County, which needed additional sources of drinking water for the Tampa Bay area’s growing population, have adversely affected most of the lakes on the property. Big Fish Lake, once the ranch’s 300-acre centerpiece, has been reduced to only 40 acres. By lowering the surrounding water table, the well fields have dried up most of the area’s wetlands — wetlands which the cypress trees and wildlife need to survive.

“Changes occurred on the ranch due to the draw-down and the lack of water,” Jan Barthle Dillard said. “First there was a loss of that wetland environment and the animals that went with it. The cypress trees themselves were not under water. There’s a certain percentage of the time they’re supposed to be under water and they certainly weren’t getting it. So we’ve had trees dying.”

“When I was a child we were 50 mile from Tampa,” Randy said. “We’re now 30 miles from Tampa — and we haven’t moved a bit. So it’s coming. It’s getting closer and closer all the time.”

Even though urban growth is affecting the ranch and surrounding area, the family is determined to preserve their land. Practicing good stewardship is important to this ranching family and it is apparent in the way they manage their property for wildlife.

“As far as managing the overall deer herd, that’s accomplished basically by being good stewards of the land and following good management practices with controlled burns,” Mark Barthle said. “All of these animals that thrive on the ranch are native species that developed on their own over the centuries in Florida, and it’s simply managing the land the way Florida used to manage itself with lightning strikes causing burns that regenerated the land.”

Working with the Florida Fish and Wildlife Conservation Commission, the Barthle Brothers developed a successful deer management plan that includes hunting leases with much stricter harvest guidelines than required by the state. Proof of the program’s success can be found in the Florida Buck Registry. Based on horn size, many bucks on the property have qualified for the registry — with several in the top 125 of all time. The ranch is also home to bald eagles, gopher tortoises, and a variety of animals that are native to the Florida scrub land.

The Barthles have long been ambassadors for the agriculture industry. Realizing that educating the urban population is crucial in order for agriculture to survive and prosper, the family has taken time to open the ranch to various organizations from legislators to civic groups, allowing the public to see and understand the commitment they’ve made.

“Even though it takes away from your time on a ranch, you’ve got to get involved in this process,” Larry Barthle said. “If you stay home and say ‘I’m going to let someone else take care of it, then it’s not going to get done. It takes a lot of time but it’s worth it, because you’re protecting your rights, your children’s rights, the generation behind you. You’ve got to get involved to protect yourselves and everyone else in the ag industry.” 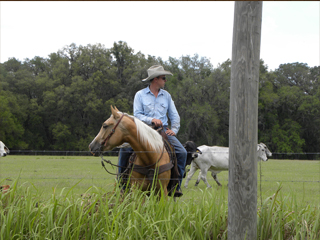 Barthle Brothers is more than a ranch, it’s a family. It is an example of Floridians maintaining their cultural heritage in cattle ranching while protecting the natural environment.

“It’s something that when you’re on the property you know that you’re carrying on something that your father started and your grandfather before your father,” Mark said. “You have that connection. And that’s the important thing to me.”.