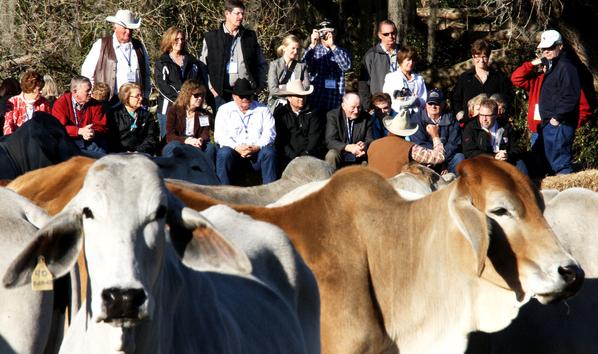 Pasco County welcomed cattle ranchers from across the nation Tuesday as it showcased the region’s beef producers for those attending the National Cattlemen’s Beef Association convention.

The convention, which opens today, is being held at the Tampa Convention Center. The pre-convention tour held Tuesday included visits to the Barthle Brothers Ranch and Two Rivers Ranch in Pasco.

Even at $180 per person, demand for the tour was so high that convention planners had to add a third tour bus.

Larry Barthle said he was honored to host the tour group. The Barthles raise Brangus, Hereford bulls and purebred Brahman cattle. They also breed quarter horses, sell grass seed and operate a quail and turkey hunting facility on the property during those seasons.

“We keep diversifying into different fields, and we try to be more efficient,” Barthle said in an interview last week.

Florida used to be one of the top beef producing states in the nation, but it has slipped to 16th as more ranches are sold for development. Barthle said that last year’s devastating drought in the Midwest has shifted more beef production to Florida and other Southern states.

Article and photos courtesy of the Tampa Bay Tribune.

TAMPA, Fla. – Cattlemen and women from across the country enjoyed beautiful weather and warm Florida hospitality during the 2013 Cattle Industry Pre-Convention Agricultural Tour, sponsored by SFP. The tour was one of the opening events of the convention and National Cattlemen’s Beef Association (NCBA) Trade Show. On Monday evening guests were welcomed with a dinner at the Florida State Fairgrounds along with a tour of the Florida Cattlemen’s Museum Exhibit and Cracker Country, a living history museum recreating rural pioneer Florida history and folk life during 1870-1912. The tour wrapped up yesterday with a full day of visits to agricultural operations in and around the Tampa area.

Participants on the tour had the opportunity to visit Barthle Brothers Ranch, a diversified cattle operation. The Barthle family breeds purebred American Brahman cattle, raises American quarter horses, produces crossbred calves and offers guided quail and turkey hunts at the ranch. Crystal Springs Preserve at Two Rivers Ranch was the next stop on the tour. Guests were treated to a tour of a 525-acre sanctuary devoted to environmental education and the preservation of Florida’s natural environment. Crystal Springs is a natural Florida spring which discharges 40 million gallons of water per day. Following a tour of the unique facility, attendees were treated to an outstanding lunch at Two Rivers Ranch co-sponsored by the Florida Cattlemen’s Association and the Florida Beef Council.

With temperatures in the 70s, Florida’s weather is not only perfect for convention attendees, but also benefits Florida’s strong fruit and vegetable industry. The group had an opportunity to visit one of the area’s largest growers during a stop at Wishnatski Strawberry Farms in nearby Plant City, where they harvested fresh strawberries, a treat available nearly year-round in Florida. Wishnatski Farms, which takes quality and food safety seriously, has taken the lead on developing a program to ensure the highest standards in food safety and traceability.

The last stop of the day featured Keel and Curley Winery, which was founded in the kitchen of owner Joe Keel. Keel, a central Florida blueberry farmer, wanted to find something to do with his end of crop blueberries and decided blueberry wine would be an excellent choice. That decision led to the founding of the award-winning winery, which allowed guests to taste a variety of their most popular vintages during a private tasting.

The pre-convention tour helped kick off a strong start to the 2013 Cattle Industry Convention and NCBA Trade Show. The week is just beginning and those wishing to participate are invited to join their fellow cattlemen and women as they get their “Boots on the Bay” in Tampa this week. For more information and continuous coverage from Tampa visit www.BeefUSA.org and follow NCBA on Facebook and Twitter.